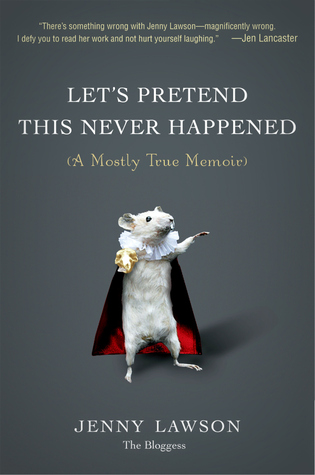 I discovered Jenny Lawson the way many of her fans discovered her: through her blog post about a giant metal chicken named Beyoncé (Blog Post Titled: And that’s why you should learn to pick your battles.). That single blog post turned me into a Bloggess fan, and I patiently waited several months for the release of her first book. Luckily she blogs regularly, so there was rarely a dull moment in the land of The Bloggess. I read her book in just a couple of days, with laughter and tears.


The book reads like her blog and contains a few of her blog posts (the infamous post about Beyoncé is included) but only a small part of the book is from her blog. You get all sorts of childhood and early year’s stories that make you see how Jenny turned out to be the woman she is today.  You also get more of a glimpse into the life that she shares with her husband, Victor, the only man in this world who could ever be her husband.


Through Jenny’s battle with anxiety and depression, you learn that hiding behind your illnesses benefits no one and that there are some days that you have to hit them head on and other days that you just need to withdraw for a while. I have also learned that humor and sarcasm are both much needed forms of art that can turn a bad situation into something better and that ethical taxidermy could possibly brighten your day.


Rarely do I read books more than once, but this one is definitely one that I will probably read annually. Jenny has a second book in the works for 2014, and I am already looking forward to reading it. For now, you can find her at http://thebloggess.com.
~Reviewed by Tonya Overstreet
Nashville Member, LBDC

Posted by Little Black Dress Club at 12:30 AM